Google Earth and the tilt sensor joystick on the X61s

The X61s is one bad-ass machine. Besides the great performance, battery life and solid engineering, there are other hidden gems. Like the tilt sensors that were designed to protect the hard drive in case of a drop can also be used to detect the laptops motion under more normal circumstances.

There are some interesting applications that use some simple statistics to determine when the machine is "tapped" or julted to left or right. You can then assign actions to unique combinations of taps.

These applications all use the sysfs interface to the sensors (_ cat /sys/bus/platform/devices/hdaps/position _ will show your position in the x and y axis). But the sensors also provide a joystick interface that allow you to tilt the laptop along the two horizontal axes to control any number of applications. Including Google Earth. 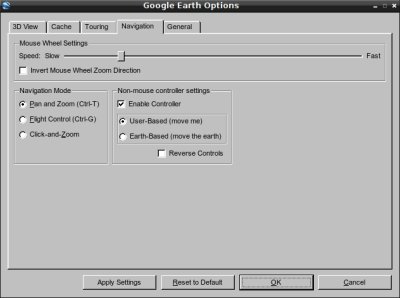 There's also a neat Perl-script technique to control a web-based google map which has some cool potential for an openlayers based system.

Since most Apple laptops have a similar sensor, you should be able to get the same thing going on your Macbook. Try it out..its alot more fun that using the mouse!