One of my initial complaints about the Mapnik WMS server was that it would not accept any parameters that were not in the OGC WMS spec. Some WMS clients will tag on extra parameters for various reasons and the OGC supports this in relation to vendor-specific parameters. The fix was pretty simple;in mapnik/ogcserver/common.py you can simply comment out

to get the desired effect.

There was also the question of speed and how it compared to other WMS servers such as Mapserver. Since I already had both a Mapnik and Mapserver WMS set up using the exact same data source, styled in the same fashion, it was pretty simple to write a quick python script that would smack each WMS server with a given number of back-to-back WMS GetMap requests:

Then just run the script from the command line, specifying the server and number of hits, and wrap it in the time command. Here are the results: 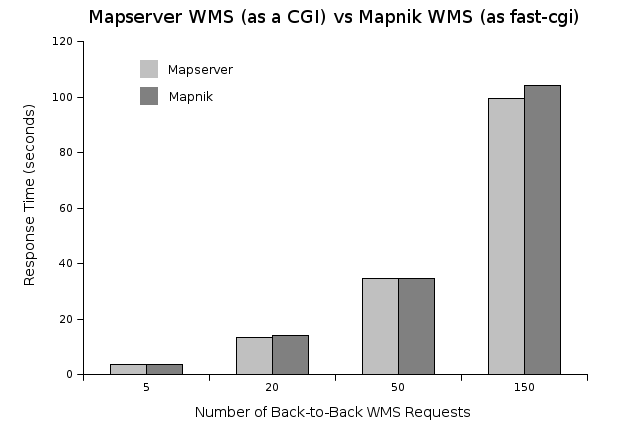 Pretty close. Mapserver was just slightly faster in every case. Now this is just a preliminary test and it would be interested to see a comparison:

Overall though, my opinion of Mapnik WMS remains high and I'd love to put it in production use in the near future. Stay tuned...