My HP laptop was nearing 5 years old. It had held up extremely well but most modern software taxed it to the absolute limits (just having firefox open with a flash ad in one tab was enough to send the system load through the roof). So I decided to try something new.

I was looking for something in the ultra-portable range. I tried out the OLPC and looked seriously at the Asus eeepc for a while. But they were far too difficult for me to type on. Ergonomics were extremely important and the only ultraportable that consistently rated high in that department was the IBM/Lenovo thinkpads. The X61s was appealing with its low voltage core2 duo and 2GB of RAM. All that in a small package about 3 lbs and about an inch thick. 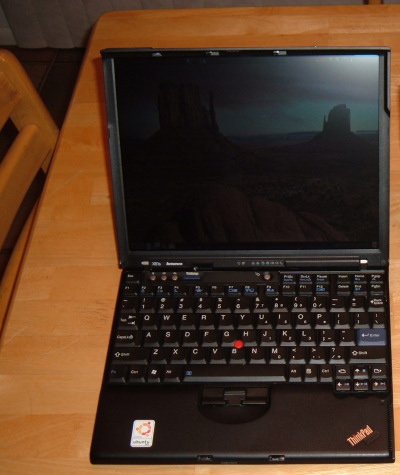 So the X61s arrived and I figured I'd give it a try with the "stock" software. It was my first experience with Vista and I gave it my best shot. After about 1/2 hour of excessive clicking, boggy performance and pop-up windows, I shrunk the ntfs partition and installed Ubuntu Hardy Heron Alpha 4.

Sound, wireless with WPA, Compiz with 3D; the major things that normally plague a linux laptop install worked right out of the box. On the other hand, I'm running into a few bugs in nautilus (this is is alpha software after all), I can't get bluetooth working, suspending to ram works but is a little buggy (have to restart some services manually) and I had to edit a few config files and compile a kernel module to utilize all the bells and whistles provided by the hardware. But it is still more fun than using Vista.

One thing that really shines on this machine is the battery. I got the 8-cell extended life battery and used some powertop tweaks cut my power consumption and was able to get the wattage down in the 10 to 15 watt range depending on usage patterns. No wonder it is energy star compliant! With that kind of wattage and battery capacity, I'm easily getting about 6 to 7 full hours of battery life.

Some tips if you're setting up Linux on your X61s: