Wardriving is fun. Going around the neighborhood and mapping all the wireless networks may be nothing more than a geeky hobby but it can sure teach you alot. And viewing the results in Google Earth is icing on the cake.

I've used NetStumbler on windows and this works great but since my computers at home are now nearly Microsoft-free, I had to relearn the process on Linux. It breaks down into a few easy steps: 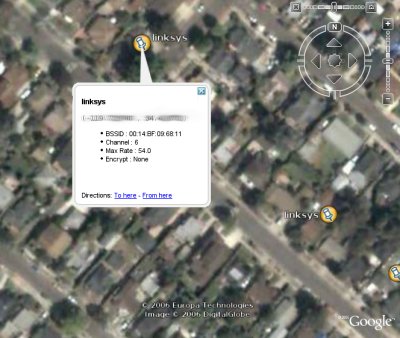 Also, as James Fee points out, posting your data as KML files means that the data can be integrated into a growing number of kml-ready apps including google maps (just upload the kml and point your browser to http://maps.google.com/maps?q=http://your.server/wardrive.kml).

Another neat application I've found for dealing with kismet logs is the kismet2gpx script for converting the kismet gps tracklog into gpx. Since most gps units have pretty tight limitations on the length of stored tracks, logging them to your laptop with kismet could be an effective way of creating detailed tracks on very long trips.